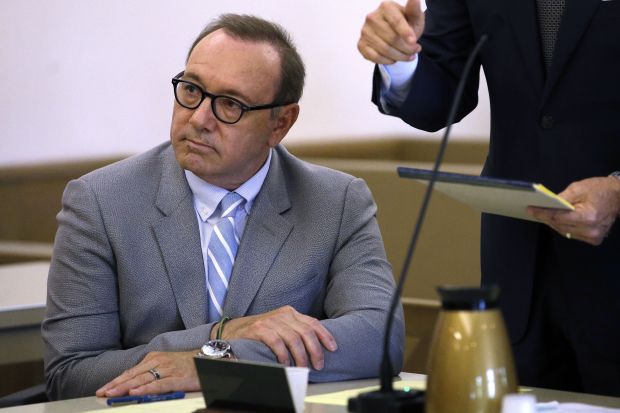 In new court filings, Kevin Spacey’s lawyers say the man accusing the actor at a Nantucket bar three years ago deleted text messages that would have helped Kevin Spacey disprove the allegations against him. The attorneys also allege in filings released Friday that prosecutors lied about being in possession of the accuser’s phone and withheld evidence from it. And the defense filings raised concerns that the sister of a top official in the prosecutor’s office is close friends with the alleged victim’s mother, former WCVB-TV news anchor Heather Unruh.

Kevin Spacey’s lawyers asked the judge to order prosecutors at the Cape & Islands district attorney’s office to turn over a complete and unaltered forensic copy of the alleged victim’s cellphone as well as any written communications about the case by the official, whose sister is friends with Unruh. District Attorney Michael O’Keefe said Friday he hadn’t read the filings by Kevin Spacey’s attorneys and declined to comment, particularly about the claim that his office lied about and withheld evidence. O’Keefe said:

I don’t know what you’re talking about, so I’m not going to comment on it. That’s why we have hearings in court… Let’s let that process play itself out. If the defendant wasn’t who he is, no one would care about this case.

O’Keefe was aware of the relationship that the sister of an official in his office has with Unruh but said that came to light only weeks ago, and “as soon as we learned of that, we sent every bit of information we knew to the defense”. In court papers released Friday, defense attorney Alan J. Jackson wrote that the alleged victim deleted text messages involving exchanges on the night of the incident with his then-girlfriend and in a group chat with at least six friends. The messages were deleted before the man took screenshot copies of the texts and e-mailed the fraudulent and altered copies to a Nantucket police officer in November 2017, Jackson said. Jackson declared:

Clearly, the man has gone to great lengths to remove text messages that he believes did not fit his narrative. Prosecutors were aware of this and hid that information, they intentionally sent the defense on a months-long goose chase for information that was already in its possession, making a mockery of this Court’s discovery process and wasting this Court’s time and resources.

They made both express and implied misrepresentations in order to conceal the fact that [the alleged victim’s] cell phone — an item of evidence that incontrovertibly proves that [the man] deleted exculpatory text messages and attempted to deceive law enforcement — has been in its custody and control since November 29, 2017. When Kevin Spacey’s attorneys made a specific request for the man’s cellphone information in January, Deputy District Attorney Michael Giardino affirmatively represented that prosecutors weren’t in possession of it, “a statement which was plainly false”, Jackson wrote. A month later, when Kevin Spacey’s lawyers requested a summons for the cellphone, the prosecution office “maintained it was not in possession” of it, Jackson said. In March, the next month, prosecutors sent the altered screenshots of text messages the man had sent to police “at the same time withholding the accurate and exculpatory text messages”, Jackson said.

It wasn’t until April that Giardino admitted to misrepresenting that prosecutors weren’t in possession of the phone, stating that he did not want to disclose that prosecutors had the phone until he had a chance to review the information himself.

Jackson said he and his team still have not received a complete forensic copy of the phone or a copy of a report about information the prosecution previously extracted from the phone. He said the judge’s previous rulings in the case ordering prosecutors to turn over some records from the cellphone are not enough in light of allegedly deleted texts and asked the judge to order prosecutors to turn over a complete and unaltered copy of the man’s phone. Jackson also said that Sharon Hogan is the sister of Cape & Islands First Assistant District Attorney Michael Trudeau and that Hogan is close friends with Unruh and her family. Attached to Jackson’s filings is a copy of a memo dated April 4 from Trudeau to O’Keefe and First Assistant District Attorney Brian Glenny. Trudeau wrote:

On a recent vacation in South Florida, I spent time with my sister and brother in law who are living in Miami Beach. One night at dinner the topic of the Kevin Spacey Fowler case came up and my sister indicated that she knew the victim’s family quite well, particularly the mother, Heather. They have apparently vacationed together and shared a ski house for a few years.

We did not discuss any details about the case that were not already in the public domain. My sister said that she hasn’t had any contact with the victim’s family since 2017 and had no information about the charge incident. While this may or may not present a conflict I think it is important that we consider some sort of disclosure to the parties involved.