“There are so many people along my path who have been instrumental, but one in particular, who we got to watch up on that screen tonight. And I haven’t watched that scene, with Jack Lemmon, in Glengarry Glen Ross, in a very, very long time. And by the time we did that film, we’d had this kind of remarkable journey, in which I had met him when I was in a workshop for young actors in a drama class when I was 13 years old. And after I did a scene from a play, that man, who was an idol of mine, walked over to me, this little 13-year-old, slightly shy kid who dreamed of being an actor, and he put his hand on my shoulder, and he said [in Jack Lemmon voice], “That was a touch of terrific. You should know you’re a born actor. You should go to New York, and you should study acting, because you were meant to do this for a living. You should do this, I’m telling you.”

And so I did. I came to this city, and then, 12 years later, I read in the newspaper that Jack Lemmon was going to come to Broadway and do this production of Long Day’s Journey Into Night. I was 25. And I was, like, oh my God, I have to play the part of his son. And so I tried to get an audition, and nobody would give me an audition. I couldn’t get an audition. At the time, I was the understudy in a production on Broadway called Hurlyburly, which was a play that Mike Nichols directed.

So I was working, but I couldn’t get an audition. I literally could not get an audition. And I found out that Jonathan Miller, who was going to be directing this production, was going to come to New York to do a series of lectures at Alice Tully Hall. So I got tickets to go see this lecture, and I showed up on this particular night, and he was brilliant and incredible. And I knew—I figured—he was in New York to start auditioning actors to play the roles of the sons of in this production of Long Day’s Journey. And this is a true story, I didn’t make this up: I was sitting in my seat, terrified, thinking, how am I going to fucking meet him, you know? Go backstage and say, “Hi, I’d like to audition for your play?” And there was an elderly woman sitting next to me in Alice Tully Hall, and she was quite elderly, and she was sleeping. And I happened to look down, and sticking outside of her purse on the ground was an invitation to a cocktail party in honor of Dr. Jonathan Miller. And I thought, you know, she’s tired. So I leaned down and I took this invitation.

And I went to this cocktail reception, and it was literally like this, it was this kind of a night, and at the center table was Dr. Jonathan Miller sitting with, like, Norman Mailer on one side and Kurt Vonnegut on the other, and Mr. and Mrs. Moneybags, and Mr. and Mrs. Filthy Rich. And at one point, Kurt Vonnegut got up and went to the men’s room, and I was at the bar at this point, drinking, heavily. And he didn’t come back, and I was like, There’s a fucking empty chair next to Jonathan Miller. I am going to go sit in it. So I went in a beeline to the chair, and I sat down and had a conversation with him, and convinced him, in the course of half an hour, to audition me for Long Day’s Journey. And three days later I auditioned for the play. And then four months later I got brought back to audition again, this time for Jack Lemmon, because he ultimately had the decision. And I’ll never forget, I had four scenes with Jack, this man who had meant so much to me, was a huge idol of mine, and he walked up to me again, at the end of that audition, and he put his hand on my shoulder, and he said, “You know what, I never thought we’d find the rotten kid, but you’re it. Jesus Christ, what the fuck was that?”

And I spent the next year of my life working with Jack, and he became my friend, and my mentor, and my father figure. And we did three films together after that, a mini-series on NBC called the The Murder of Mary Phagan; a film called Dad, with Ted Danson; and finally, Glengarry Glen Ross, which Jack used to love to call ‘Gene Barry, Glenn Close.’

Jack had a philosophy that he passed on to me, which is why I’ve done the work that I’ve done for the last 11 years with the Old Vic, in Old Vic New Voices, and why I’ve created my own foundation. Jack had this philosophy, he used to say all the time, “If you’ve done well in the business you wanted to do well in, it is your obligation to spend a good portion of your time sending the elevator back down.” And that is why the logo for my foundation is the universal button you push to send the elevator up. So there isn’t a day that goes by when I’m not enormously grateful for the people that believed in me, and gave me a chance, and I know in my heart that if we all just keep [chokes up] a little bit of a Lemmon clause in our hearts, we’re going to be O.K.”

If you want to know more about Kevin’s relationship with Jack Lemmon, take a loot at #SpaceyFacts below 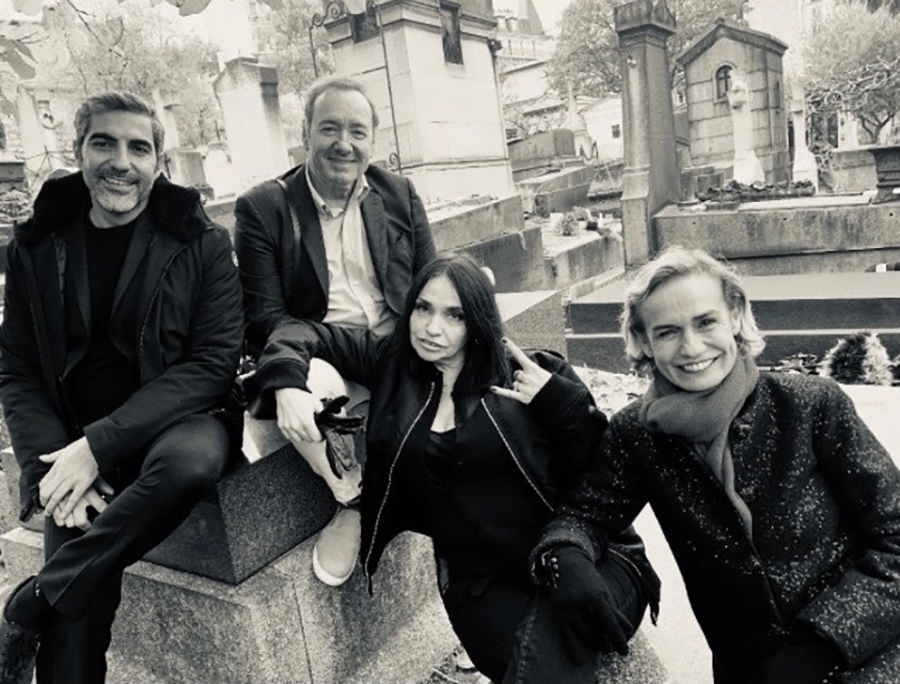