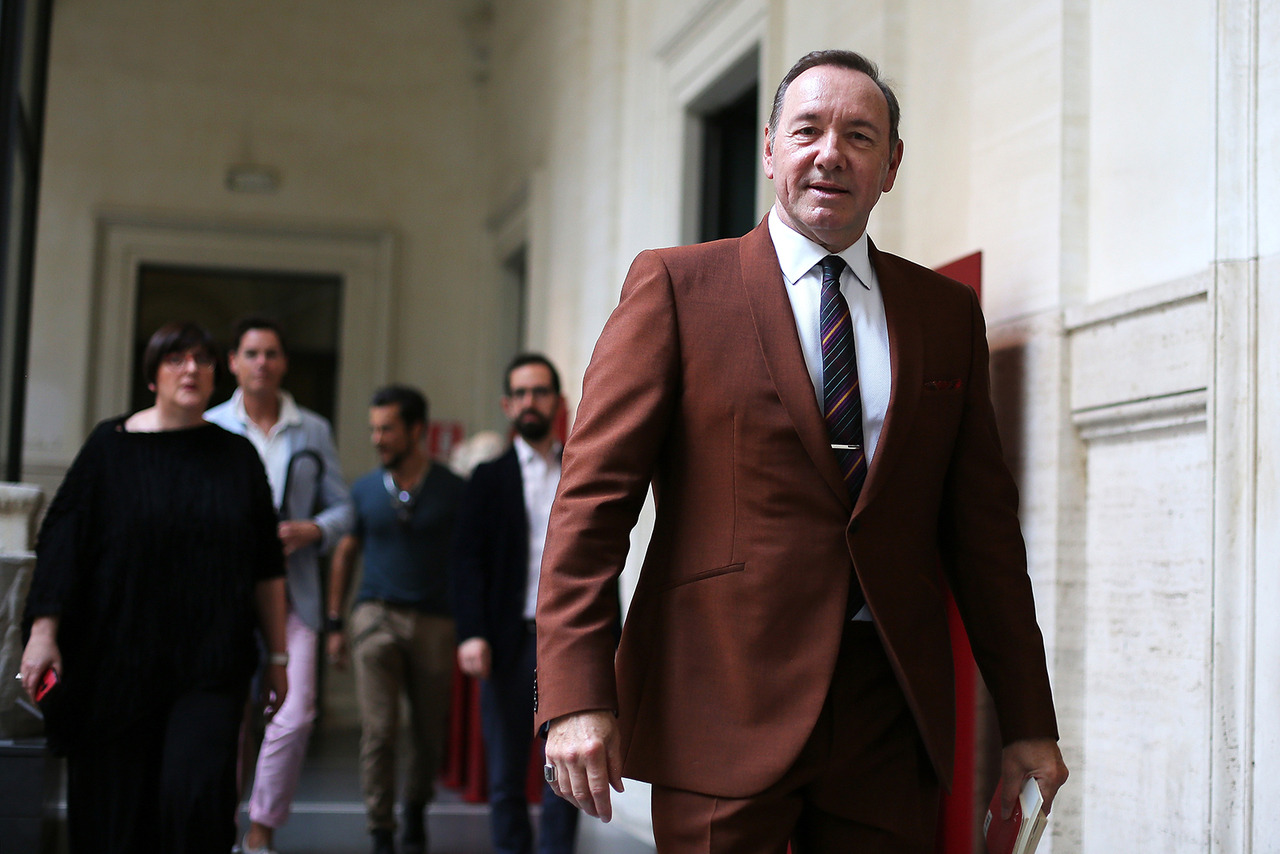 Kevin Spacey, Gabriele Tinti’s “The Boxer” and the audience’s emotions: art as renaissance

“Perhaps you’re right. The more you’re wounded the greater you are. And the more empty you are. They used me for their entertainment, fed on shoddy stuff.”

Kevin Spacey recites the beautiful words of “The Boxer – The nostalgia of the poet” by Gabriele Tinti, profound words that perfectly reflect what the actor has lived in the past years and that have been written a long time before the events that overwhelmed him.

6.30 pm, I find myself inside the room that houses the statue of the Boxer at rest, attributed to Lysippus, in the picturesque setting of Palazzo Massimo alle terme, in Rome. The bronze structure transmits all the history, the tenacity and the strength that distinguish it. An unexpected storm has given to the sky of the Roman summer a magical light. The thunderous applause of the patrons of the museum precedes the entrance of Spacey into the hall, where there are a few lucky ones who will attend the incredible performances next to the statue of the boxer. Gabriele Tinti  says he has convinced the actor “thanks to the beauty of an idea“, a concept that is never banal, almost wanting to remember that beauty will saves humanity, starting from what is most beautiful out there: art.

“Say that again, please. I can’t hear what you’re saying. My face is made of bronze, can’t you see?”

The deep voice of Spacey resonates in the small room, becomes one with the statue, it almost seems to hear it speak, to see it move; even the hollow eyes of bronze take on a shape, becomes deep, becomes those of Kevin Spacey’s. And it’s as if time had never passed, as if these two years of absence had never existed and had in no way marked the incredible talent of the actor, who leaves all of us speechless. We are therefore witnessing a unique, theatrical interpretation, distinct from those we are used to seeing on the large and small screen; there is just us, him and the statue.

“I shook the country, made the arenas vibrate, tore my opponents to shreds. I lit up the darkness, collected insults, compelled applause. Not everyone knew how to do this. None of you. On the other hand life is not frightening for those who have never taken a risk. Who can understand me? Who can I still speak to?”

To corroborate the words of Tinti, who identified Kevin Spacey as the right person to read his poetry, there are also the incredible similarities between the poet’s verses and the life of the actor; from having made the arenas vibrate, to the insults gathered, and the risk, which makes life frightening, but which also makes it “lived”; and which is reminiscent of what Spacey once said: “The risk-takers are rewarded“. Therefore, it was for Gabriele Tinti, who confessed to Rolling Stones that he had convinced the actor to recite his poetry by sending him an e-mail, explaining also how the average user of works of art remains attracted by 10 to 15 seconds. A paltry time, which has intrigued Spacey and convinced him to accept a challenge, won by a landslide, when he left us all open-mouthed for ten minutes in front of Lysippus’ art, Tinti’s and his.

The patrons of the museum, who could not attend Spacey’s performance in the small hall of the statue, asked for it loudly in the atrium, where he repeated the interpretation of the poem for all those present. This time visibly more excited, he recited Tinti’s words with a different transport, in front of an audience seduced by the skill of the artist. Smartphones turned up, to resume what is one of the most beautiful performances ever, to remember it for the rest of the days, to remind themselves of what they fortuitously experienced: “He’s here, Kevin Spacey is back, he’s reciting something beautiful and he is doing it in front of my eyes“.

“Fools! You couldn’t imagine that I would be resuscitated in this metal suit, that I would come back to stare at you with my dark face, without lips.”

The performance gets more intense; the boxer is suffering; the meeting seems to be lost; the blood rises from the body and we are seeing it – it is there, standing, in front of us and wiggles, and does not want to yield; he doesn’t want to let the opponent win. “END IT!”, Because giving up isn’t an option, because his strokes are bad but the most important thing is to hold on and move on, because the pain is strong but doesn’t last long, “it lasts a moment, it lasts only a moment” And then ends; then it’s all splendor:

And in the wake of these last words begins a long applause that moves the actor, and those present. The outdoor performance was even more exciting for us and for him. Spacey is so dedicated to all those present, including selfies, autographs and small talk, the souvenir of an incredible experience that everyone will carry in their hearts.

Lysippus’ resting boxer, was found in 1885 on the slopes of Quirinale in Rome, carefully hidden for thousands of years, slowly emerged from the ground in which he had been enclosed, as if waking up from a long sleep and then shining with his own light and be admired by millions of people. Just like Lysippus’ Boxer, Kevin Spacey wake up from two difficult years and comeback in Rome, in front of an audience amazed and happy to see him act again.

The only sour note were the unflattering titles of some newspapers (not present at the event) which speculated about some discomfort from the patrons of the museum, seeking, again, to exploit their visibility to bury Kevin Spacey. But the wisest of us know it; they know that ideas and the beauty of them are stronger than defamation and that, more importantly, art can’t be erased.